We get it, it can be overwhelming to figure out the best way to pay for things in a foreign country. Nobody wants to deal with constantly worrying about things like exchange rates and high ATM charges. We created this guide to Costa Rica currency to help you with all things money!

What is the currency in Costa Rica?

The bills are all different colors as well as slightly different sizes. Every bill has a native Costa Rican animal on it. I think it is a really pretty currency.

Using US Dollars in Costa Rica

US dollars are also widely accepted throughout the country, but you usually get a better exchange rate if you pay in colones. If you pay in dollars expect to get colones back as change.

If you plan on carrying dollars, stick to nothing larger than $20 bills and try to make sure they are in decent condition. People tend to be suspicious of larger bills, especially if they are ripped.

If you are taking the public buses, shopping at farmers markets, buying things from street vendors etc., they usually only accept colones.

Changing to US Dollars to Colones

We think it is best to switch at least some money into colones.

– You have the option of exchanging USD to CRC at the airport in the baggage claim area, but it is not the best exchange rate. If you need money right away, I’d suggest getting about $50 exchanged and exchange the rest somewhere else.

– You can go into the bank here to exchange US dollars to colones. All you need is your passport and they will give you the best rate. Just be warned, the bank tellers don’t always speak great English and sometimes you can wait in line for an hour at the bank. That is not a joke, you seriously can wait an hour or more.

– There are ATM’s located everywhere throughout Costa Rica. Just check with your bank before traveling to see what they will charge you for using an international ATM.

The exchange rate is constantly changing! This past year the rate has been all over the place. We like the free app XE Currency Converter for easily checking the current exchange rate while we are traveling.

Most towns will have at least one bank or ATM. Just note that sometimes these ATM’s are located in grocery stores or mini markets. If you are staying in a small town it is best to check with your hotel ahead of time to make sure that there is an ATM nearby.

– As we already mentioned, check with your bank to see what you will be charged for withdrawing money internationally.

– When you leave an ATM immediately put your money away and make sure nobody is following you.

– It is always best to visit an ATM in the middle of the day in populated areas.

– We have not heard of people using card scanners in Costa Rica, but that doesn’t mean that it can’t happen. When you use an ATM always check that there aren’t any suspicious parts to the ATM that may be used to copy your card.

– Many ATM’s in Costa Rica give you the option of withdrawing US dollars or colones.

– It is good to have two bank accounts you can access, just in case. Some of the machines here have the chip technology, but not all. It would be horrible for you to plan on using your bank card for your whole trip and then not being able to get money out of the ATM.

– If you are looking for a good bank account that allows you to travel anywhere and not pay ATM fees, I highly suggest Charles Schwab High Yield Checking Account. I switched two years ago and don’t know why I didn’t switch to them earlier. They reimburse all ATM fees to your account and there are no monthly fees. It’s the perfect account for frequent travelers.

– Some small restaurants do not accept credit cards, so it is best to ask before choosing to eat at a particular place

– Some stores will have a limit before you are allowed to use credit cards. In other words, usually, you need to spend at least $5 to use your card.

– Thomas knows someone who visited and returned home to find that she had extra charges on her credit card. This is not likely to happen at reputable tourist places, but just a warning.

(You can read about other scams in Costa Rica here)

– Check with your credit card company before traveling to make sure there are no foreign transaction fees.

– My dad recently used his credit card to pay for gas here and instead of typing in “22,000 colones” into the machine the attendant typed in “220,000 colones”. Luckily the attendant realized his mistake and was honest (and completely embarrassed). He fixed the problem immediately. Just make sure you check all your receipts before signing the bill.

Tipping is not required here (most locals will not tip), but wages are not the best here. If you have the means to tip and feel like you have received good service, it is always nice to do so.

– At restaurants, there is a 10% gratuity that is always included. Usually, you will see this on your bill as “servicio.” We usually leave a few extra dollars if we were happy.

Also, just note that they will not just bring the bill out to you at restaurants. You need to ask for it. Here it is considered rude and rushing the customer to just leave the bill without being asked.

– If you take a tour with a great guide it is always nice to give them a small tip. Again, it is not required.

– Typically, if you park in a parking lot there will be an attendant watching cars. When you leave the lot it is customary to give them a little bit of money (about 300 colones is fine) as a thank you for watching your car.

– We typically do not leave a tip in taxis, but that is mostly because I can’t remember a single experience in which I have been overly impressed with the service from a taxi driver. Usually, I always feel like they are trying to overcharge me. If you get one of the good ones, tip them!

We have a guide to Uber and taxis in Costa Rica if you need more info.

Our Advice for Using Money in Costa Rica

– Don’t forget to let your bank or credit card company know that you will be traveling in Costa Rica so they won’t think your card has been stolen and block you from withdrawing money.

– At some places, you can get a discount if you pay in cash. It doesn’t hurt to ask!

– Don’t use traveler’s checks. They are too much of a hassle.

– We have never been robbed, but we still suggest keeping a bit of money in various places (socks, different pockets, bra etc) so if you do get robbed you can give them just part of your money.

– We often get asked “How much do things cost in Costa Rica?” and the answer is that things are not cheap. This is definitely the most expensive country in Central America. However, it is always possible to stick to a budget if needed.

– There are tolls on the highway from San Jose out to the Pacific coast. We usually use the tolls as a way of getting rid of all of our coins. If you have not switched to colones yet, that is fine. They do accept dollars and will give you colones as change. We suggest paying with a $10 bill and the change in colones will be enough for the rest of the tolls.

-We suggest getting a bit of money out from an ATM every few days. We don’t like to carry too much money on me. Even if your bank will charge you a $5 transaction fee to use an ATM, that is better than getting robbed and having hundreds of dollars stolen.

Let us know if you have any specific questions regarding Costa Rica currency in the comment section below. We are happy to help you out!

LIKED THIS GUIDE TO CURRENCY IN COSTA RICA? PIN IT! 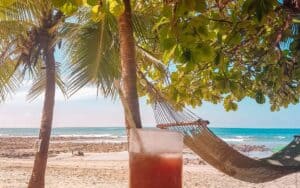 We visited Playa Avellanas recently as a spontaneous trip from Tamarindo. I had been wanting to

Costa Rica is filled with over a dozen microclimates, which means tons of different weather!

It’s that time of year, time to start thinking about holiday presents! Travel obviously looks a bit different this

Did you know that it is possible to see an entire beach filled with nesting turtles in Costa Rica? 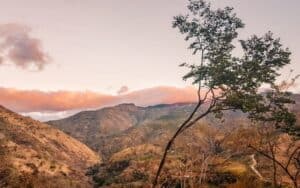 Want to Move to Costa Rica? Here’s How We Did it

“You live in Costa Rica? You’re so lucky!” are words we hear almost daily from friends in other countries.