We created this guide to crossing the Costa Rica Nicaragua border to help you all be fully prepared so you can cross with ease.

Getting to the Costa Rica Nicaragua Border

There are a few different ways of getting to the border. Let’s start with if you are heading up from Costa Rica into Nicaragua.

Costa Rica to Nicaragua: If you are already in the northern Guanacaste region your best option is to take the public bus from Liberia up to the border town of Penas Blancas. This will cost you only a few dollars. The bus leaves from the central bus terminal in Liberia to Penas Blancas every 45 minutes between 5am and 6:30pm.

It can be difficult to find the right bus so don’t be shy about asking someone where you should be waiting for the Penas Blancas bus. The ride from Liberia to the border takes about 1.5 hours. Just be warned that once the bus fills up you will be left standing for the ride, so get there early to ensure you get a seat.

If you are coming from San Jose the easiest option is to take TicaBus. It will cost about $30 for a one-way ticket into Nicaragua, but it is a comfortable bus with a bathroom and assigned seats.

TicaBus stops in Rivas, Granada, and Managua. It also stops in Liberia on the way up from San Jose, so it is possible to hop on TicaBus there if you do not want to take the public bus.

You can now buy TicaBus tickets online, so you’ll be all set for your trip ahead of time.

There is also a company called NicaBus which does this same route, but I have no experience using this company.

Just as going from Costa Rica into Nicaragua, you can travel by either public bus or Tica Bus.

If you opt to travel by public bus, there is a bus from Rivas in Nicaragua (about 45 minutes from the border) to the border. This bus runs to the border about once every 45 minutes and costs about $1.

Granada was the cutest buttttt pro tip: in a country where you cant drink the water dont get ice in your drink. I think thats what made us both sick with stomach problems for two days ????

You can also take TicaBus from Managua, Granada or Rivas into Costa Rica to Liberia or San Jose. As I mentioned above, this costs about $30 for a one-way ticket, but it means less work with switching buses and stuff.

Another option is to take a taxi. When we were in Ometepe we took a taxi from the harbor to the border for $20.

The Costa Rica Side of the Border Crossing

Exiting Costa Rica- We were a bit overwhelmed in Panas Blancas on the Costa Rica side. We wanted to switch money from colones (Costa Rican currency) into cordobas (the Nicaraguan currency). There were plenty of people standing at the border with their official papers saying they were licensed to exchange money. We talked with a guy and got his offer. I had downloaded the app XE Currency Exchange ahead of time so I could double check the rate myself.

The rate he stated was accurate and we gave him the colones to exchange. He then gave us about $20 less than he should have in cordobas. I’m pretty sure he was thinking, “stupid foreigners will never realize this,” but luckily our friend with us speaks fluent Spanish and pointed out his “mistake”. He apologized and said he didn’t realize his error. I don’t believe him.

Anyway, the lesson is that if you need to exchange money when crossing the Costa Rica Nicaragua border, make sure you are getting the correct exchange rate and count the money after you receive it. 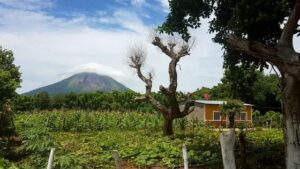 You will have to fill out the form they give you (don’t forget a pen) and pay the $8 exit tax per person from a small stand.

It is then time to head to the building to exit Costa Rica. This process was nothing more than handing the customs officer the filled in paperwork, passport, and receipt from paying our exit tax. We were then on our way to Nicaragua!

Entering Costa Rica was easy. You will have to fill out a few forms ahead of time. You also need to have proof that you will be leaving Costa Rica within 90 days. If you do not have a flight to prove that you can buy a ticket from TicaBus online to show as proof.

You will then wait in a line on the border until it is your turn to speak with an immigration officer. You just need to give them your passport, filled out form, and show them proof that you will be leaving within 90 days if they ask for it.

After this, you will put your bags through a CT scanner and you’ll be good to go!

If you travel by TicaBus the bus will be waiting for you after you exit this immigration building. If you plan on catching the public bus to Liberia you just need to walk to the parking lot where the buses stop.

The Nicaragua Side of the Border Crossing

I can’t give you a whole lot of info on exiting Nicaragua because we did this by TicaBus. The bus driver handed out exit forms which we all filled out on the bus. At the border we were instructed to get off of the bus with all of our stuff and to wait in the large parking lot. The bus driver collected our passport with our filled out form in them. The bus returned 30 minutes later and we all got our passports back, got back on the bus, and drove to where we could enter Costa Rica.

After exiting Costa Rica, if going by foot you will walk about ten minutes down a street lined with trucks and other people crossing the border. You will then come to the Nicaragua border. I was totally impressed with the entry process. The building was modern, everything was completely organized, and the people working were so nice and helpful! 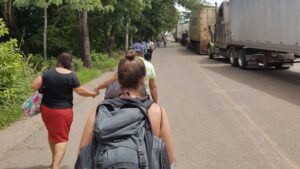 Our first experience was when some guy approached us asking if we needed help. I thought he just wanted money from us but he actually worked for Nicaragua immigration. He directed us where to go and asked where we were heading next. We told him we were heading to Ometepe and he told us our options for getting there. We told him we were most likely going to take a taxi to make our lives as easy as possible.

We then entered the nice immigration building, paid an entry fee (I think it was pretty high, like $20 per person), filled out some forms, and waited until it as our turn to speak with an immigration officer. We gave him our forms, he stamped our passports and we the entered the next part of the building.

In this part of the building we had our bags scanned by CT scanners and then we exited the building.

Upon exiting we were greeted by the nice guy from earlier who told us how we could get to the bus if we wanted. We told him we were going to take a taxi and he called a taxi driver over and explained to him where we wanted to go. We gave him a $2 tip as a thank you.

If you have any questions about the Costa Rica Nicaragua border crossing please leave them in the comment section below and we’ll help you out!

A Complete Guide to Traveling from Costa Rica into Panama

WAS THIS GUIDE TO CROSSING THE COSTA RICA NICARAGUA BORDER HELPFUL? 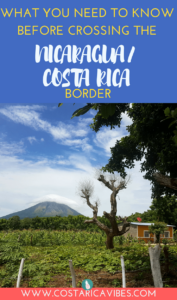 Flights: Skyscanner is always our choice for finding flights. They search flights that are listed around the world so you know that you will find a great deal.

Transportation: We suggest a local company called Adobe for your rental car needs. Book through us for a 10% discount plus other great perks. For private shuttles, we always use Adobe’s transfer company for dependable service and great prices. For taxis from the Liberia airport and Guanacaste area, contact our favorite family of local registered taxi drivers for a $10 discount.

Activities: It is always nice to book activities directly through local activity companies. However, sometimes that is not possible and it is easier to book through a third-party site. For that, we suggest Viator for the largest selection of amazing day activities in Costa Rica.

Costa Rica is filled with over a dozen microclimates, which means tons of different weather!

Curu Wildlife Refuge in Costa Rica – A Guide to Visiting

Curu Wildlife Refuge near Paquera in Costa Rica is a complete hidden gem. In the 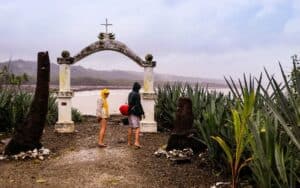 Have you ever heard of Cabuya Costa Rica? Probably not! It is a really small

Adventure Lovers Two Week Itinerary Are you ready to get your adrenaline pumping with fun activities such as surfing,

30 Things to Do in Costa Rica on a Budget

If you like action and adventure, Costa Rica will be a paradise playground for you. If adventure is not

Costa Rica Transportation – How to Get Around

Take your pick for Costa Rica transportation; plane, train, or automobile? Just kidding, you probably won’t be taking the